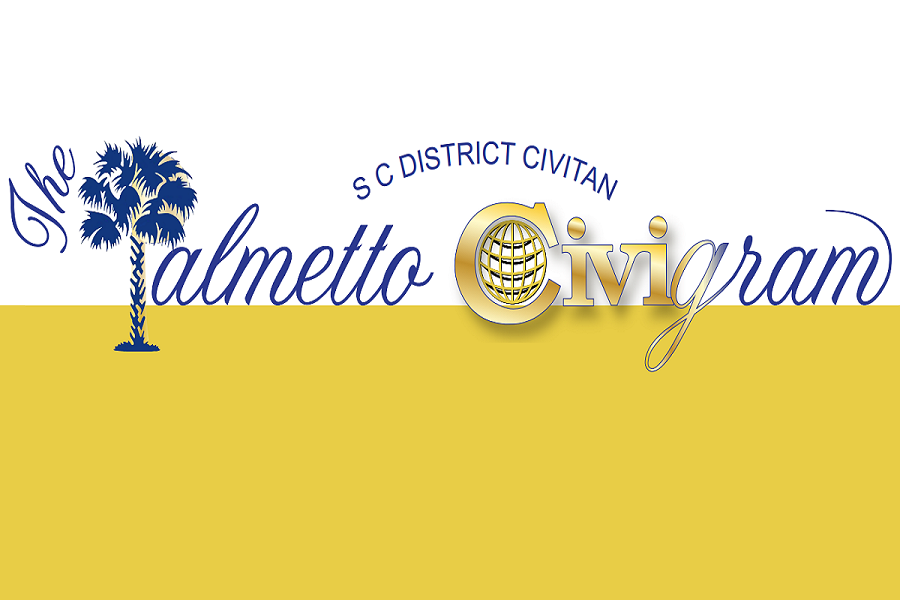 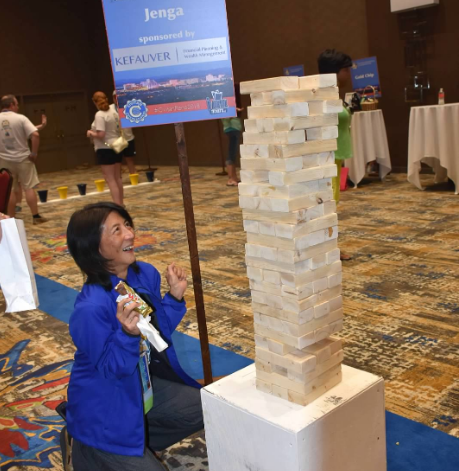 Civitan is an organization of volunteer service clubs around the world, dedicated to helping people in their own communities. Civitans help wherever needed and each club determines the best activities to serve others in the community. Activities range from collecting food for homeless shelters, to volunteering at local festivals, to building a playground for children with disabilities, supporting Special Olympic athletes and coaches, and supporting research to cure autism and other developmental disabilities.

The South Carolina District is composed of clubs within the state. As a District we work together to build good citizenship and help our neighbors both in South Carolina and around the world.

The SC District Civitan Convention will be held this year September 20 - 22, 2019, at the Hilton Garden Inn in Rock Hill, South Carolina. A special rate of $119 has been negotiated with the hotel for this event but can only be honored by using the link below for the reservation. The rate will include breakfast. Click here to book your room on the hotel website. 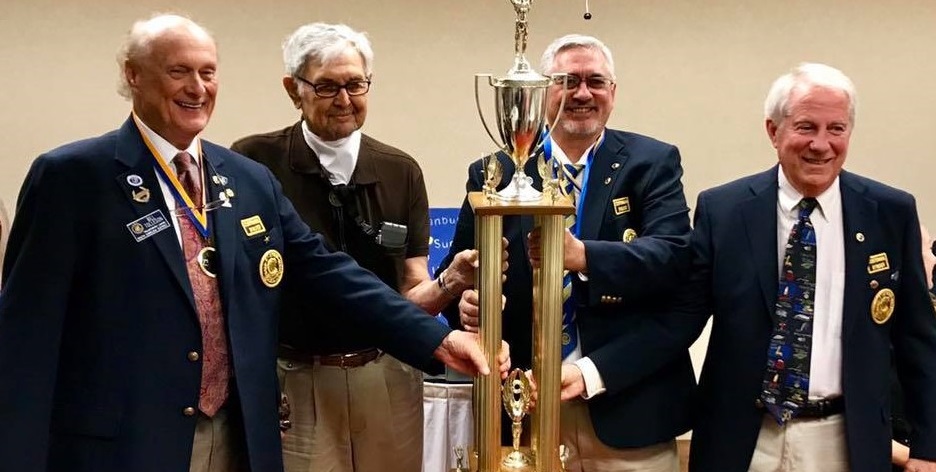 The registration fee for the Convention is $75 per person which includes the banquet Saturday night. Banquet tickets only are $50 per person. Please send your registraion information to the District Treasurer by September 10, 2019. Please make checks payable to South Carolina District Civitan.
The mailing address is
South Carolina District Civitan
139 Lincoln Inn Road
Columbia, SC 29169-5102

Please read the Palmetto Civigram for all the details for the weekend.

We will be collecting donations for Safe Passage in Rock Hill during the convention. Safe Passage provides services to victims of domestic violence, sexual assault and child abuse in York, Chester, Lancaster and Union Counties. Please bring your donations and help those in our host city. Here's a list of items that are needed. 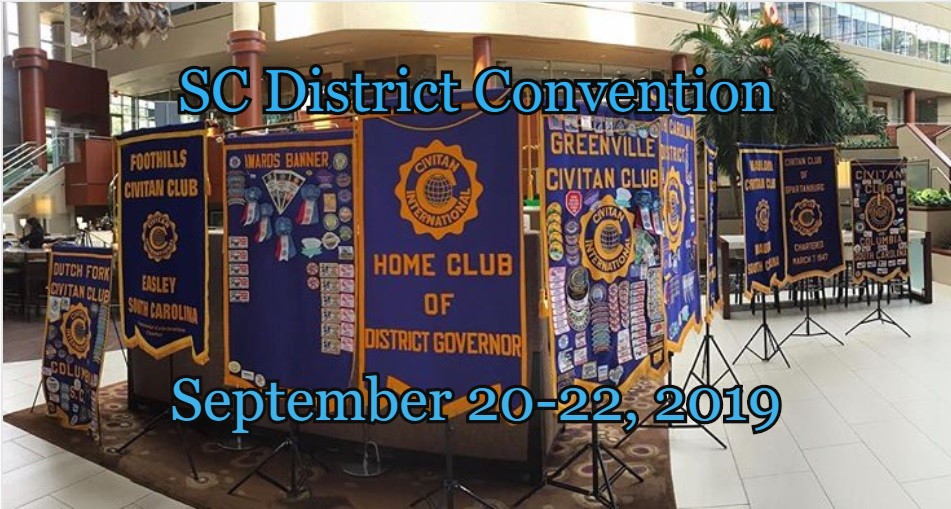 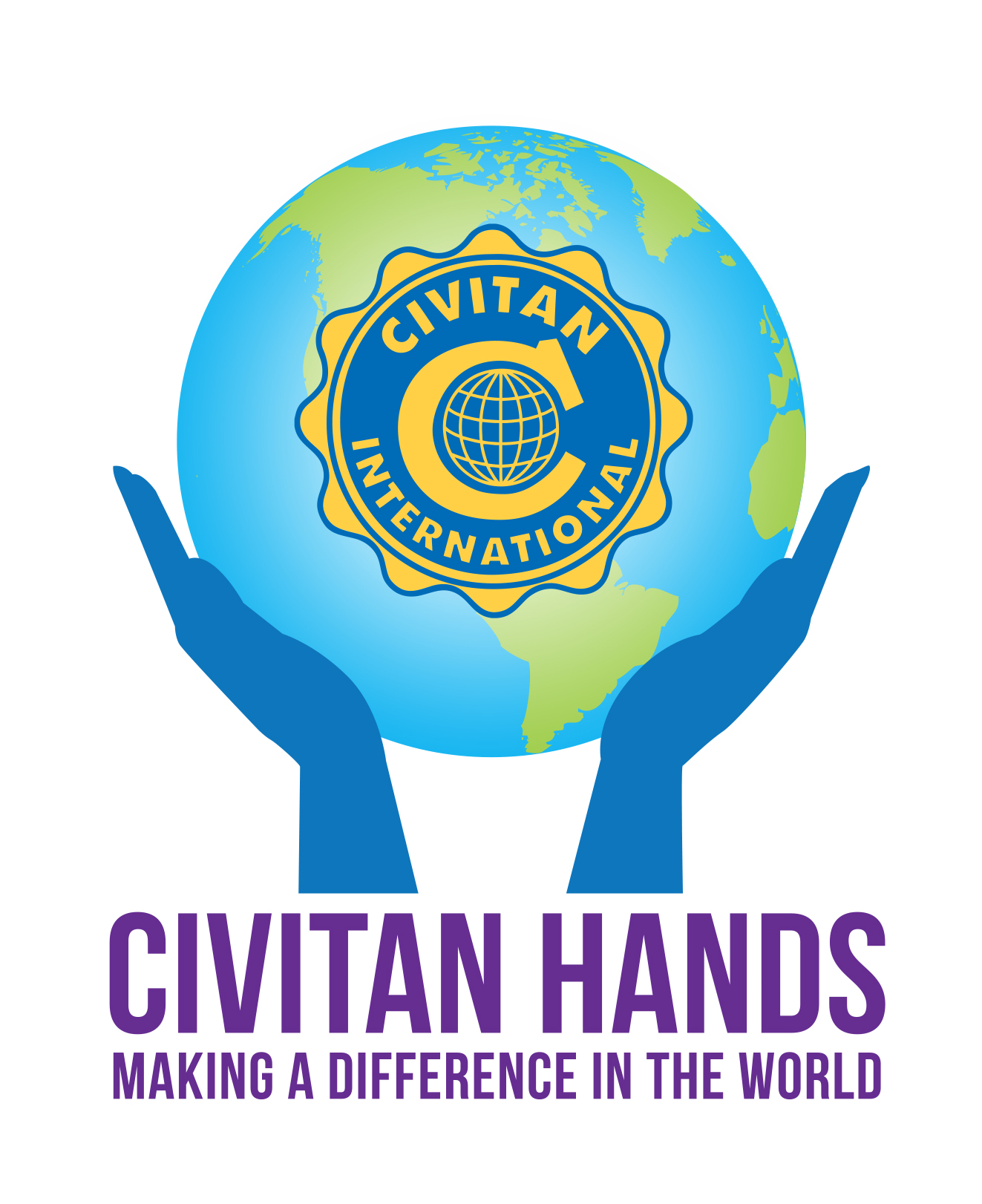 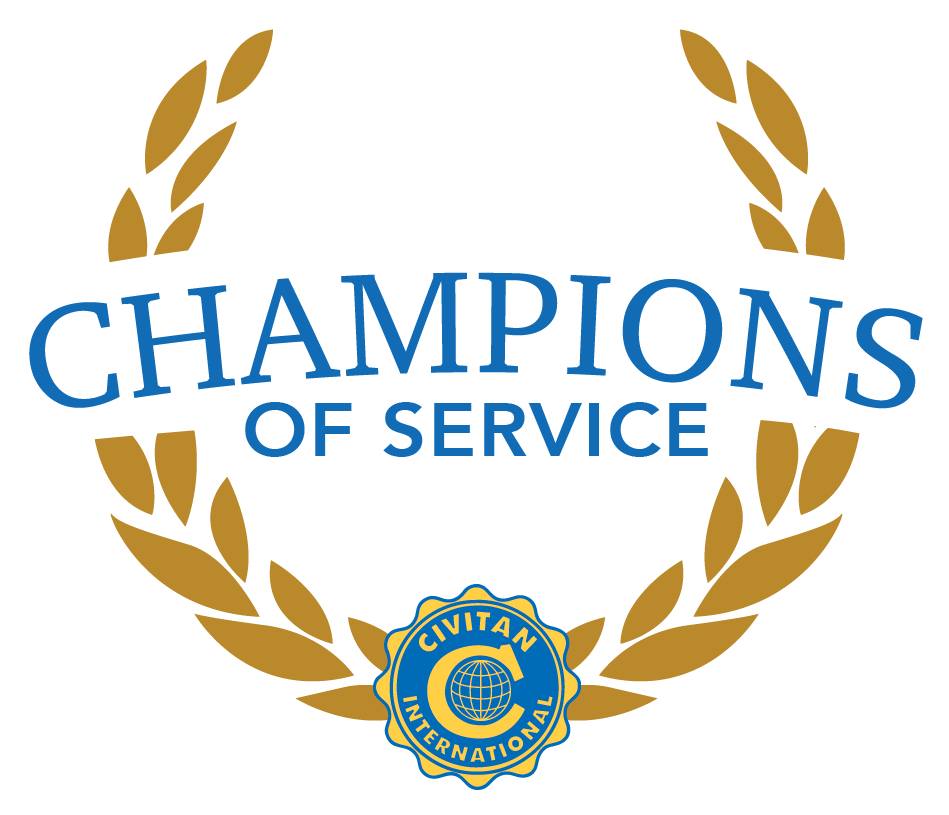 Other awards include Civitan of the Year to Mike Taylor, Honor Key to Wanda Flathers, Otis Jeffcoat Award to Anna Smith and John Doudoukjian Lifetime Achievement Award to Steve Doudoukjian. 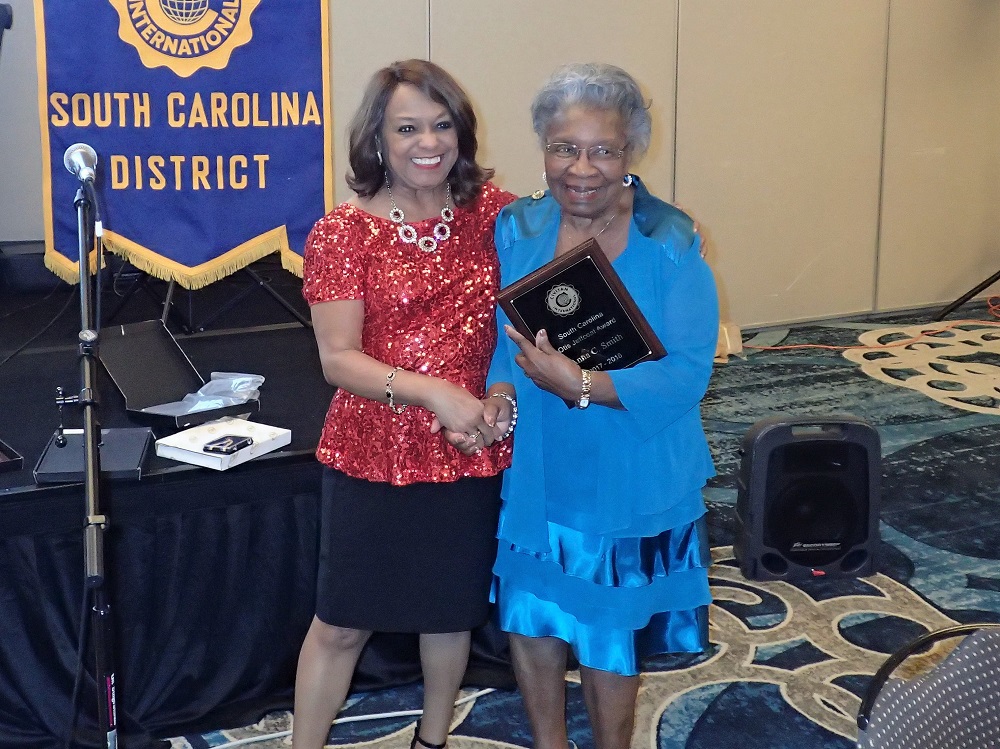 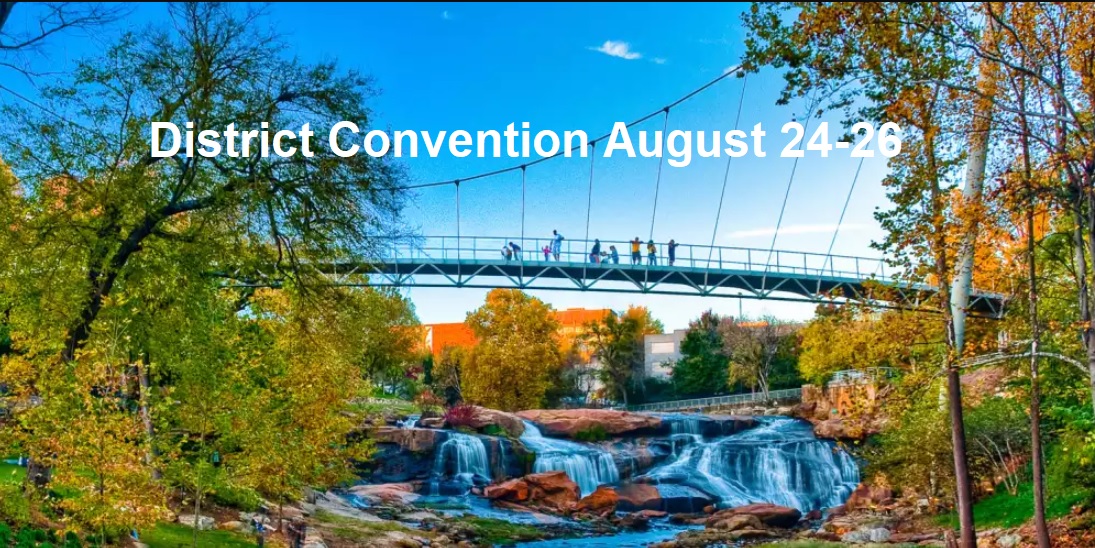 The convention was held August 24-26, 2018 at the Hyatt Regency in downtown Greenville. Our special guest was Civitan International Executive Vice-President Scarlet Thompson.

The fun began Friday afternoon at the first "business" session and continued with music, food and adventure on Greenvill'e Main Street. During business sessions on Saturday Misty Komow was elected Governor-elect for 2018-19. At the closing banquet Gary Finley was installed as 2018-19 Govenor of the District. 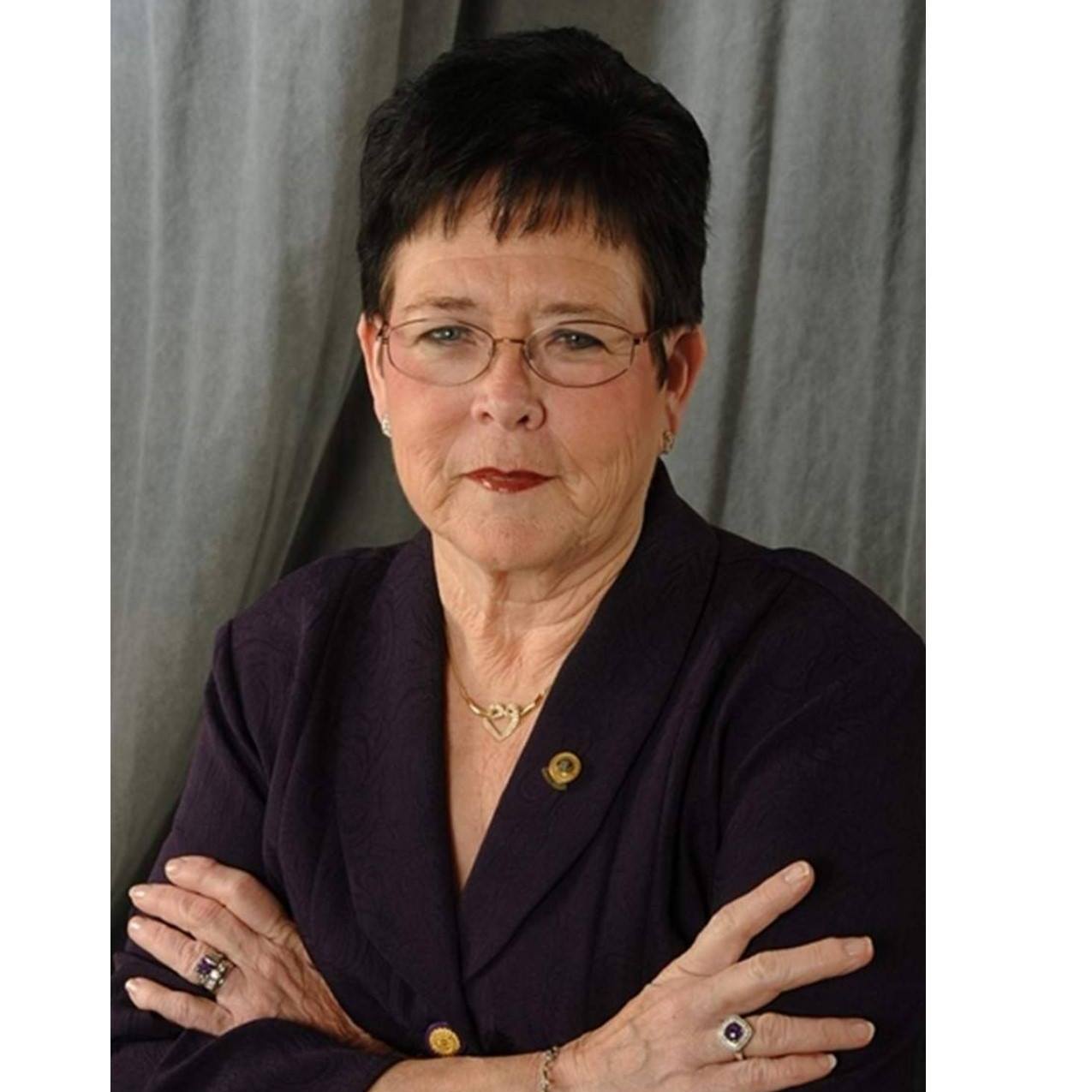 A look back at 2017 Convention 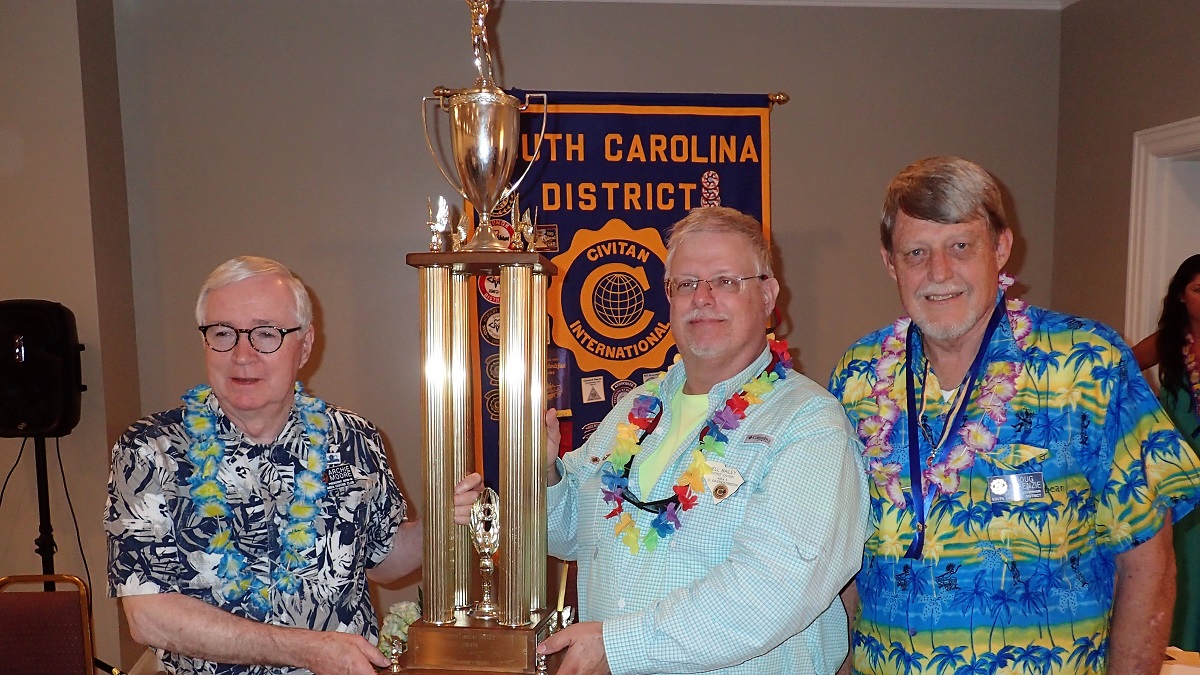 Other awards include Civitan of the Year to Kevin Davidson, Honor Key to Sevi Rendaris, Otis Jeffcoat Award to Misty Konow and John Doudoukjian Lifetime Achievement Award to Mike Taylor. 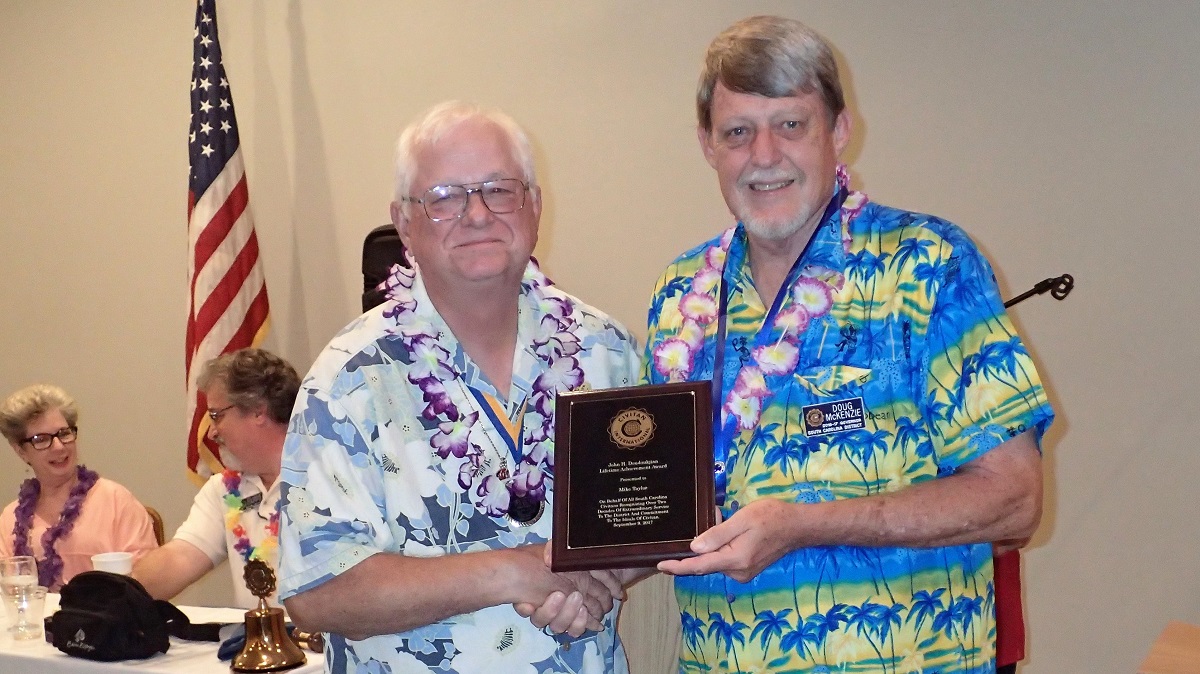 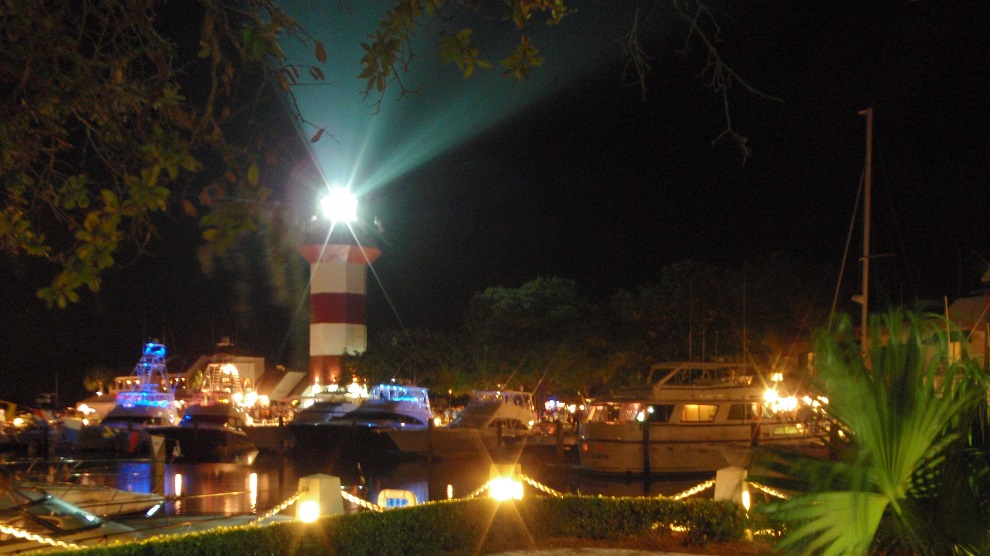 The convention was held September 29-30, 2017 at the Beach House Holiday Inn Resort located at 1 South Forest Beach Drive, Hilton Head Island. Postponed by hurricane Irma, Civitans' patience was rewarded with a great weekend. The Civitan room rate was $159 per night plus taxes and fees. Registration fee for the full convention was $75.00. Banquet tickets only are $49. 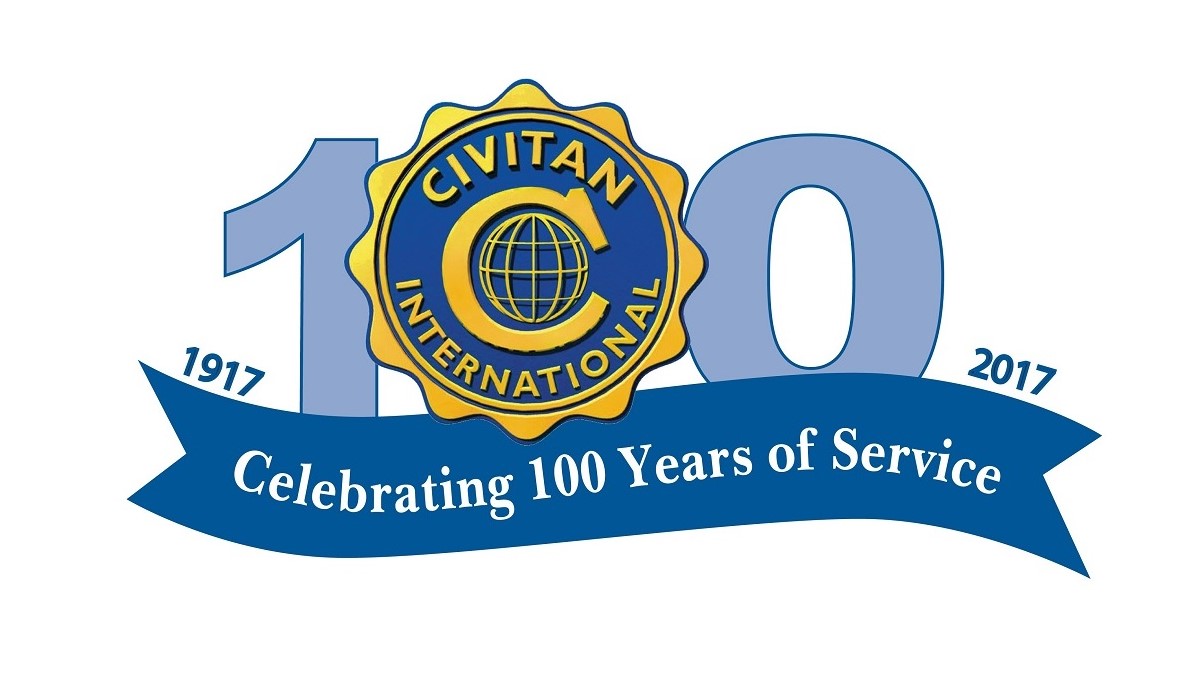 The fun began Friday afternoon at the first "business" sessionand continued with a happy hour, sunset cruise Friday evening. The theme for the convention was "Island Life". Hilton Head is perhaps the best example of great island life. From wildlife to nightlife you'll find it all on Hilton Head Island. For the banquet on Saturday Civitans dressed in the style of their island of choice. Anything from the Hawaiian Islands, a favorite caribbean island to Gilligan's Island, Treasure Island or even Manhattan Island. Read all the details in the latest Palmetto Civigram.

Salty Dog Happy Hour cruise boat will sail Friday, September 29 at 6:00 and cruise around Calibogue Sound. The boat is a 63 foot powered catamaran with upper and lower decks, and a full bar that serves your favorite beverages plus an island inspired food menu.

The boat is docked at 232 South Sea Pines Drive, just a few miles from the convention hotel. Click here to learn more about the Salty Dog boat.

For more information about the hotel and area visit beachhousehhi.com. 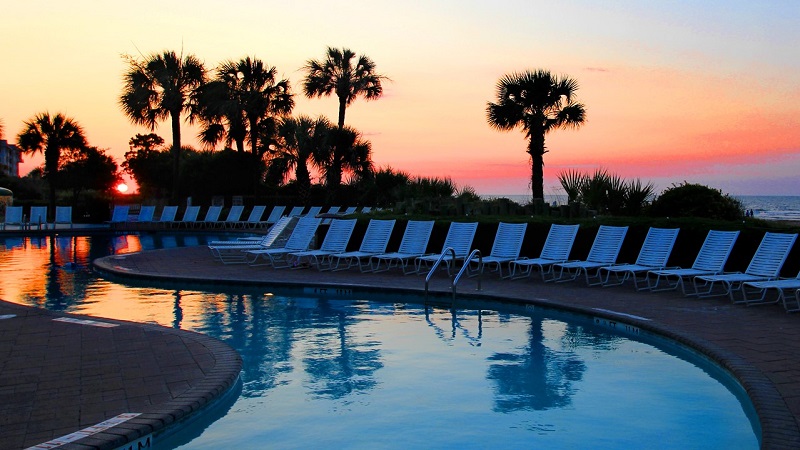 A look back at 2016 Convention 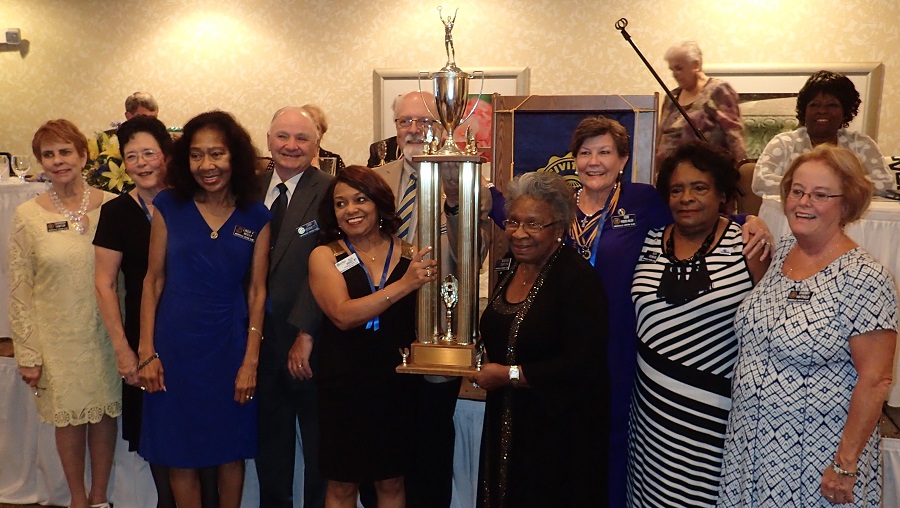 Other awards presented were the Otis Jeffcoat Award to Sam Bennett and the John Doudoukjian Lifetime Achievement Award to Johnnie Jerman. James McIlrath was awarded a District Honor Key and Club builders of the new Lancaster and Mauldin Clubs were recognized. Doug McKenzie was installed as the 2016-17 District Governor and Belita Broadus as Governor-elect. Read all the details in the latest Palmetto Civigram.

In 1917, a group of business and professional leaders were meeting in Birmingham, Alabama, as a part of a national civic club. They were concerned about their community and world, but they thought that the club focused too much on personal gain. These men wanted to make a difference, and they believed that their actions could help build a better world.

Giving up the charter they had purchased, they set out to make a more suitable club. On March 17, 1917, these men formed a new service organization, Civitan, coined from the Latin word civitas, meaning, citizenship. Builders of Good Citizenship was a natural motto for the civic-minded group and the club grew rapidly in Birmingham.

Members believed good citizenship and the Golden Rule were universal truths and set a goal to expand and in 1920 incorporated the International Association of Civitan Clubs. Civitan Clubs were formed in other cities and Greenville became the first club chartered in South Carolina.

Today Civitan has spread to 49 countries around the world and the Civitan ideal of good citizenship, born a century ago, has become a global call for peace, guidance, progress, and unity.

In addition to this centennial celebration, the Civitan International Research Center, solely dedicated to research of developmental disabilities was dedicated 25 years ago in Birmingham. Civitans will again gather in Birmingham this June to celebrate this centennial occasion. Click here for more information on Civitan's Centennial Celebration. 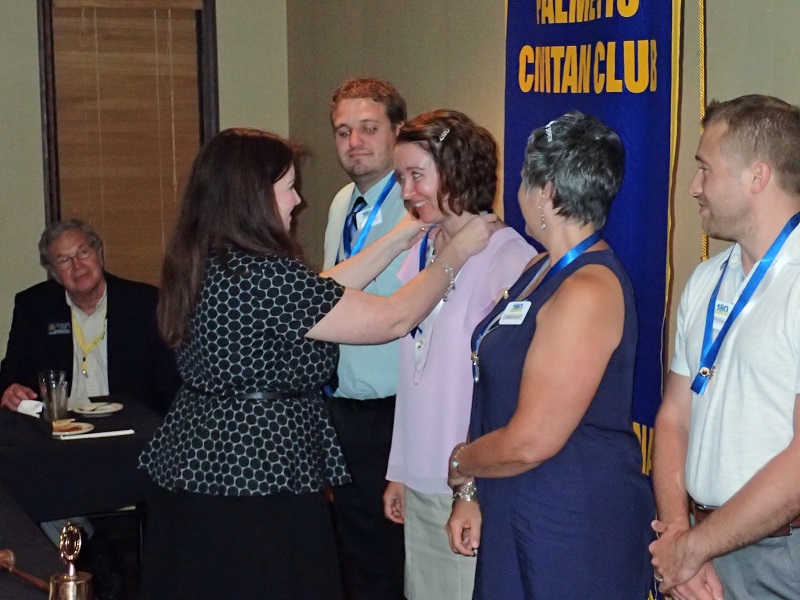 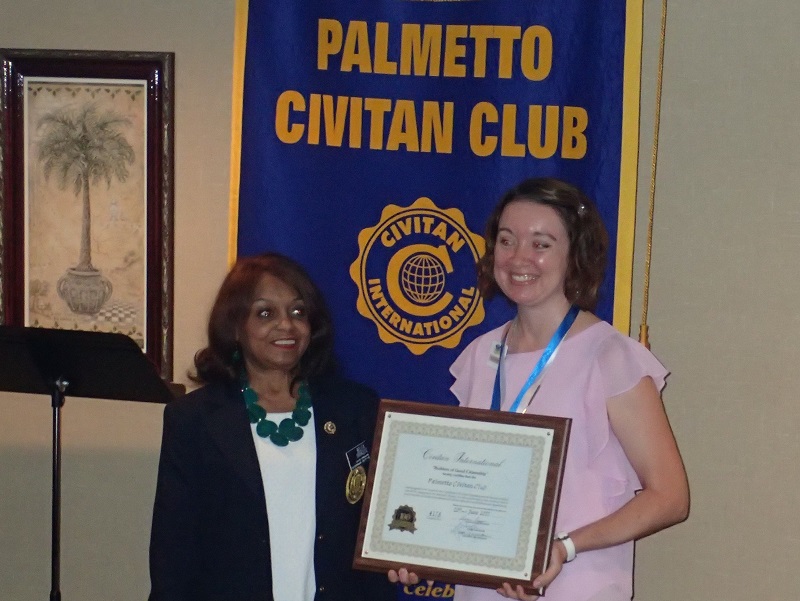 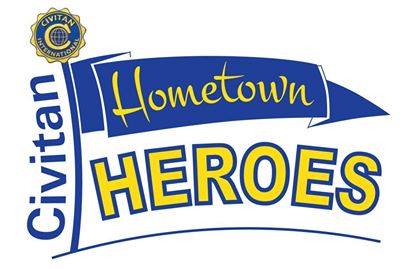